I am not a fan of reality television. There are few exceptions that keep my attention; and with friends I have in the reality television business, some of the scripting and direction behind supposed slice-of-life docudramas is just painful to watch.

But enough about Amish Mafia. I want to talk about the latest reality show that has gotten many a geek and especially that sub-culture within the subculture that I love supporting â€” cosplayers â€” into a close-on-rabid uproar. I speak of SyFyâ€™s latest offering, Heroes of Cosplay.

First, there was the New York Post who came out swinging with a nasty review more on the sub-culture and less about the Hero of Cosplay show itself, immediately followed by a back-and-forth between the publication and cosplayers everywhere. I wrote this off as the Post following suit with the Times. New York journalists, it seems, are just too good for science fiction.

What followed the second episode was an epic backlash on various social media channels where cosplayers, fans, and SMOFs who just like to bitch went after Hero of Cosplayâ€™s host Yaya Han. There have been several posts on her Facebook page where she has needed to, for the lack of a better term, set the record straight.

Between the two episodes, a lot of venom has spewed in my social media feeds so I figured Iâ€™d find out what was going on. The first episode had me smiling from opening to close. This was, from where I sat, an honest and loving look at that passion and drive I respect in cosplay. It was also a deeper look at how the players in this circle of fandom â€” Yaya Han included â€” continue to uphold a standard and raise a bar not only for cosplayers but for themselves as well. All in all, I was getting behind Heroes of Cosplay.

Then, during the Emerald City ComicCon episode, came a conversation over cocktails that threw the cosplaying community for a loop. It started with a sincere and honest question from Chloe Dykstra. While hardly a stranger to the community, this episode chronicled Chloeâ€™s first competition. She asked quite sincerely about the state of cosplaying. The answers that followed was as mentioned before â€”sincere and honest.

It was also quite jarring. Just after I was thinking this was â€œa loving tribute to cosplayâ€ the show took a quick turn to â€œthe ugly underbelly of cosplaying,â€ especially considering Chloeâ€™s stunned reaction to what these seasoned veterans were telling her.

Iâ€™m not going to defend Yaya, Riki, or any of the other cosplayers at that table because all of them are big boys and girls, and they can defend themselves. But I will say I donâ€™t think they need to defend their words. Why? Because what they were talking about was not about cosplaying. It was about competitive cosplaying. Just because you love a sport, a hobby, or a pastime doesnâ€™t mean you should compete. Letâ€™s consider this hypothetical: I love video games. I have been digging the reboot of Tomb Raider, and with all the epic deaths Iâ€™ve suffered in Columbia I still think Bioshock Infinite has been a blastâ€¦even though Iâ€™m stuck on the last level. (Dammit!) But what if I were to suddenly say â€œI love video games so much I’m going to compete professionally.â€ would that really be a wise commitment for me to undertake? Of course not! I would have to train for one thing (yes, even in video games, you train). That would mean no more time for podcasting and absolutely no more time for The Ministry of Peculiar Occurrences. I would have to dedicate myself to making my skills untouchable, mastering levels like Level 17 of Portalâ€¦where Iâ€™m currently stuck. (Dammit!) So no, I donâ€™t have what it takes to compete professionally with video games.

Does that mean I should stop playing video games? Oh, hell no! Ask Pip. She watches me swear up a storm when I canâ€™t take down the Vox Populiâ€¦and then goes back to whatever she was doing as I hit â€œReplayâ€ and go through it all again.

If anything, that candid conversation (caught on film) was quite telling and a dose of purest reality concerning competition. Whether it is cosplay, video games, writing awards, or anything involving a score, you play to your strengths. That is true in any sport. As much as I love doing the dramatic, heavy material, my Forensics coach had me go with humor whenever she could. Why? That was my strength. That is the nature of competition, and a truth that many new cosplayers might miss.

However, I do think Chloe Dykstra nailed it when she said at the end of the same episode â€œHoly balls, that was fun!â€

My heart really went out to Jesse Lagers, the male cosplayer (with the wicked handlebar mustache) who wowed Emerald City ComicCon with his Steamptrooper. He worked the crowd and had them eating out of the palm of his hand. When he lost, though, he started second guessing why he was putting in all the time and effort into costumes that werenâ€™t winning. I wanted to grab him by the boilers and scream, â€œBro, if that is why youâ€™re cosplaying, youâ€™re doing it wrong!â€ Cosplay because you love it! You didnâ€™t get the title or the money, but you had the crowd. It means youâ€™re heading in the right direction. Donâ€™t lose the passion, Jesse. As Captain Tight Pants once told us: â€œKeep flying.â€ 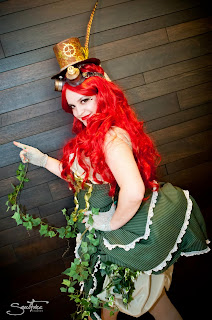 And that, Iâ€™ve seen, in my Facebook boards has been another sticking point for this geek-centric show: its focus on the competition. A colleague of mine and accomplished cosplayer (well, I think so), Lauren Harris, said â€œMy only issue with the show in theory is that itâ€™s a competition. Cosplay does have contests, but is really about something other than competition. The last thing geek culture needs is more exclusivity.â€ Sheâ€™s absolutely right, but we also have to remember â€” this is television. Television thrives on compelling drama. So where is there more drama? In a cosplayer who is designing his or her next epic costume, or in a cosplayer who is trying to win a competition with his or her next epic costume? Part of what makes Deadliest Catch so compelling is watching the captains try to make their quota. Part of what makes Mythbusters so compelling is watching the team trying to debunk or verify a challenge against science. Part of what makes Dirty Jobs so compellingâ€¦

Okay, I think that is whether or not Mike Rowe is going to get poo in his mouth again. Thatâ€™s comedy gold right there.

There is drama in competition, and that is part of what Heroes of Cosplay is about. It is also about these amazing creations that we all see at conventions. It also an honest look at the rough ride that is competitive cosplay. This is also a look at what happens when you reach a level of excellence, and how you are still held to a higher level of excellence that needs to be maintained. Heroes of Cosplay is also a candid look at the people behind these incredible homages â€”Â what inspires them, what drives them, and how they face both wins and losses.

But when I heard Chloe Dykstra say â€œHoly balls, that was fun!â€ I thought that was the lesson of Heroes of Cosplay. Yeah, sure, itâ€™s a competition, probably when you donâ€™t even realize it…

Itâ€™s all about having fun.Â Thatâ€™s good enough reason for me.

That, and bow ties. Bow ties are cool.